Table of Contents for IC#21

Nurturing the root of culture 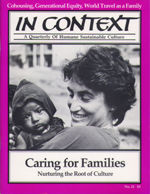 The Changing American Family by Arvonne S. Fraser
Facing the contradictions between perception and reality

Thoughts While Cleaning the Living Room by Donella H. Meadows
Re-valuing domestic work for both women and men

In Search of a Golden Age by Stephanie Coontz
There has never been an era of the “ideal family,” says this author and historian, except in the world of 1950s TV shows

I Can’t Imagine Life Without Him an interview with Tonya Green, by Alan AtKisson
A young single parent talks candidly about her life

Equity Between Generations an interview with Sam Preston, by Alan AtKisson
A demographer explains trends that have left more children in poverty and suggests ways to ensure their well-being

The Family Across Two Cultures an interview with Shoko & Ellis Amdur, by Alan AtKisson
The experience of a Japanese-American family provides an opportunity for understanding both cultures more deeply

Hospitable Families by Victor H. Nelson
The rituals and blessings of traditional hospitality can serve as models to help strengthen and sustain families

Making the Connections by Catherine Collis
To understand the connections between people and to reinforce its own bonds, this family traveled around the world