This page describes the vision for network and how it can serve as an organizing thread for the next evolution in CI’s long-term strategy for catalyzing a graceful Empire-to-Planetary transition.

As described in the video from June 2014, this strategy has three main elements:

These are all aimed at helping those who feel drawn to be catalysts for the Empire-to-Planetary transition to become as effective as possible. The Bright Future Network weaves these all into a mutually supportive whole. Here’s how it works:

Who is the network for? It’s for those who want to be part of building the new Planetary Era culture, who feel drawn to innovate, implement and/or educate in areas that are relevant to this great transition, areas such as sustainability, connectivity, self-organizing collaboration, treating diversity as an asset, inhabiting your optimal zone and working with systems.

How do you join? You take Bright Future Now, CI’s six-week experiential learning program. The network is made up of the graduates of BFNow. Of course, graduates don’t have to join the network but so far everyone has happily done so.

If I were describing the network via a presentation, I’d gradually build up the image, showing all its parts and its relationship to curriculum and strategic innovation. I’m going to do something similar here by using a series of images.

We start with the relationship between the network and BFNow:

Bright Future Now is actually part of the network, as well as the gateway, because the allies and guides who provide the BFNow program are themselves all graduates.

What can you do in the network? Connect and create with others who share the BFNow experience. Much will be emergent – often surprising – but I expect there will at least be activities like these: 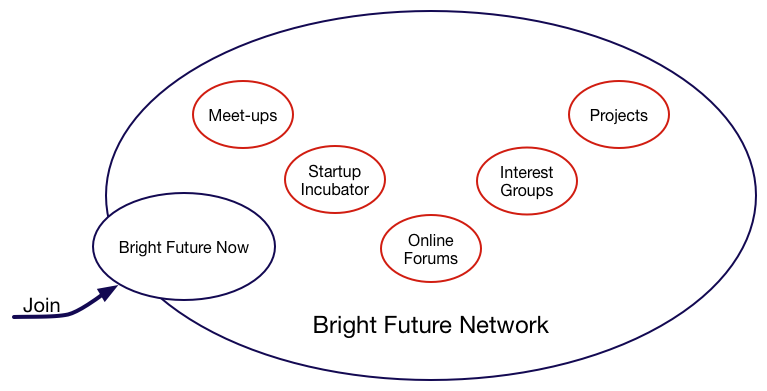 Context Institute will provide the communication infrastructure and stewarding to enable the network to thrive.

How does the Curriculum element fit in? 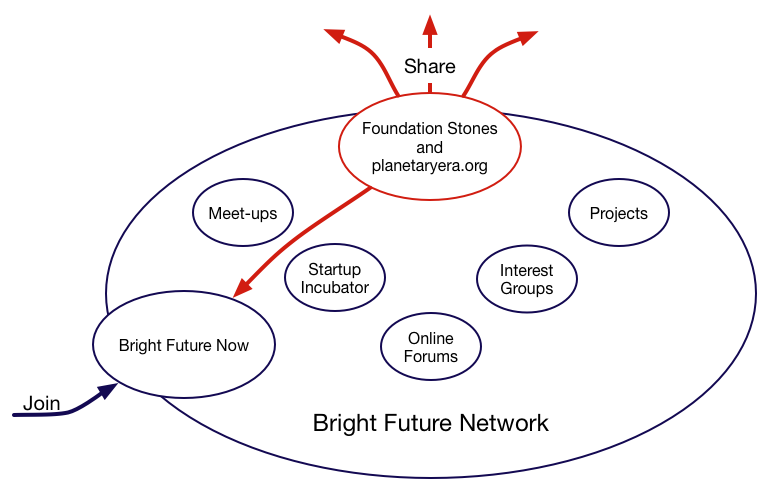 First, the Foundation Stones provide the conceptual framework for Bright Future Now. This framework is supplemented with experiential activities to round out the BFNow curriculum.

But that’s only the start. The network will make it possible to create a lot more material to share with the public. Up to now, I’ve been the author of all of the Foundation Stones content. Going forward, I still expect to provide the editorial overview but I envision involving teams drawn from the network in creating the remaining Foundation Stones.

Beyond the Foundation Stones, I’m also envisioning the creation of planetaryera.org as a web home for all kinds of material generated by the network. I’m especially imagining

Both the Foundation Stones and planetaryera.org will be freely shared with the public.

How does Strategic Innovation support fit in? 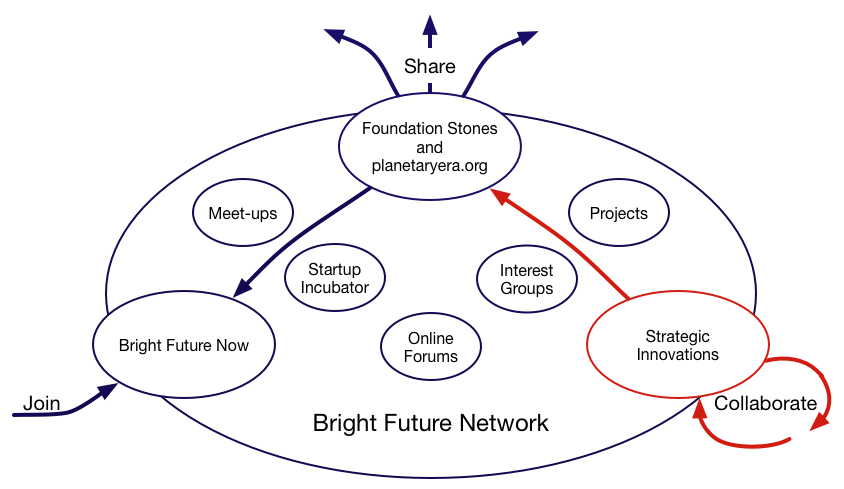 I can easily see the network providing a home and an incubator for various strategic innovation projects, like the one we helped launch called Weaver, collaborative self-management software for sociocratic organizations and similar groups. Since these projects often require specialized skills, they’re likely to involve collaboration with people outside the network. These innovative projects will likely also provide good material for planetaryera.org.

In summary, the Bright Future Network will provide its members with a lot of opportunities, including:

The network will also provide major benefits for the world as an incubator for Planetary Era cultural patterns that can emerge and spread well beyond the network.

That’s the vision. Making it a reality begins with Bright Future Now, so that’s where we’ve started.