Table of Contents for IC#43 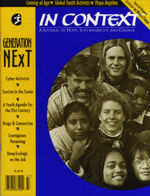 The Gifts of Youth by Charles Johnston, MD
Young people have their own ways of contributing to the evolution of culture. The challenge for adults is to learn how to appreciate their gifts. Plus Kids Count, a sampling of statistics about children and teens, and Adolescents: Why do they threaten adults?

Voices from the Future by Robert Clampitt & Stephen Silha
If kids were the reporters and editors, how would they frame the issues that dominate the media?

A Place to be Safe an interview with Linda, by Osiris Adorno and Chrystal Dunbar
A young woman’s life in a troubled neighborhood.

Freedom Summers by Amy Richards
Youth hit the road for new voters.
Taking it to the UN by Danijela Zunec
Developing a youth agenda for the UN.
Souljah of Love by Charles Jones
“One love” – one alternative to one more funeral.
The ‘Zinc Scene by colombene
A ‘zine writer takes on 20-something sexual imagery.
A New Plan for Man by Drew Dellinger
Lyrics from Sweet Acidophilus, a music group with a message about compassion.
From the Ground Up by Tracey Hollins
Detroit teens “rebuild, refine, and respirit” their city.
School Strike for Peace by Tom Furtwangler
A Swiss girl, her dad, and brother organize a school strike for nuclear disarmament.
Global Internet Protest by Tom Furtwangler
Two Japanese students’ call for e-mail protests of French nuclear testing overwhelms the ‘net.

Sacred Journeys by John Jay Koriath and Kathryn True
Three youth describe their transition to adulthood and the rites of passages that changed their lives. Plus Wilderness Rites by Stan Crow.

Road Markers by Ellie Roper-Ater, Reed College
The Way of the Individual by Nina Davis, Wellesley College
Courage to Grow On by Sean Tuftedal, Glenwood, Illinois

This Is Who I Am… by Sarah van Gelder
The arts as a way out of hopelessness.

Been There, Done That by Linda Wolf
Kids find connecting with each other and their inner selves can be more meaningful without drugs.

What a Crime Bill Can’t Heal by Kim McMillen
The legacy of youth is ours to change. Plus Tips for Grownups Who Want to Work with Kids by Charlie Murphy

Laugh and Dare to Love an interview with Maya Angelou, by Linda Wolf
Maya Angelou draws on her own experiences as a youth to offer some insights on growing up.

The Power of Consciousness by Luciano Zimmer, Curtiba, Brazil
Getting Beyond Stereotypes by Anja Hamalainin, Pieksamaki, Finland
The Power of Love by Melanie Parris, Trinidad and Tobago
It Not Us…Who Will Start It? by Bernadette Babaran, Langapa City, The Philippines
The Power of Hope by Phumelo Motene, Hillbrow, South Africa

Reflections Which Future? Two scenarios developed by Donella Meadows and others.