Table of Contents for IC#40

Creating a Future We Can Live With 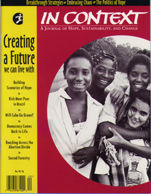 A New Day’s Coming by David Korten
Early signs of transformation can be seen in India, Chiapas, the US, Brazil, and Kenya, and in the networks that tie them together. Mind stretching possibilities!

Signs of the Times

Will Cuba Go Green? by Steven Zunes
When the Russians turned off the oil spigot, Cuba was forced to go organic in a big way. Now they’re wondering why they waited so long.

A Woman’s Place Kathryn True interviews Bella Abzug
Women at the Cairo population summit did more than get women’s empowerment on the agenda; they shifted the terms of global discourse.

Low Country, High Hopes by Alan AtKisson
The Dutch aim to make their entire country a model of sustainability in one generation. Here’s how they’re doing it.

The Politics of Hope by Herbert (Betinho) DeSouza
What happens when the middle class learns it can impeach a corrupt president and end hunger? A true story from Brazil. Plus The Making of a Campaign by Peter Mann

Living Democracy an interview with Frances Moore Lappé and Paul DuBois, by Sarah van Gelder
What does it take to be effective in the public arena, and why should we want to know?

Emerging Paths to Transformationby Rob Young and Grant Power
The foundations for a new paradigm of change.

Across the Chasm by the Public Conversations Project
Family therapists invite people on opposing sides of the abortion issue to a new kind of conversation. Plus a TOOLBOX summary on Debate vs. Dialogue.

The Great Transformation by Bill Ellis

School of the Future by Running Grass

Why Imagine the Future? by Elise Boulding

Complexity: The Science of Changeby Larry Patrick
What can new ideas about chaos, complexity, and emergence tell us about transformation?

A Foothold in a World of Chaosby Judy Pinn and Stuart Hill
How to be effective and present in a world of paradox and uncertainty. Plus The Change Game.

Letter from Robert IC publisher Robert Gilman shares insights on sustainability from his travels in Europe.