Home / About In Context / Good Medicine

What makes sense for the US?

By Ed Cooper and Liz Taylor

Delivering high quality health care to all citizens for a reasonable cost should be a simple thing. Unfortunately, it is not. From the health care debates, we know that a host of complex and competing issues are involved – as are special interests working to preserve the status quo.

What makes a health care system "good"? What would such a system look like if applied to the United States? To answer these questions, we analyzed the health care delivery and financing systems of several countries and individual states. Not one, we concluded, has a perfect system; however, many operate significantly better than ours.

To help you sort out these issues, we have provided below an analysis of our findings, comparing the strengths and weaknesses of the current US system, with plans in Canada, Japan, Germany and Hawaii, and then with what is known about the new darling of reform, "managed care."

THE US HEALTH CARE SYSTEM

America does not have a purposeful "system" of health care as much as a tradition of laissez-faire practices that have developed over time. The central element is a financial arrangement that pays for health care services through employer-purchased insurance. Historically, patients have had the right to choose any physician, and physicians have been free to choose among specialties and to practice where and how they like. New managed care plans increasingly restrict both of these choices. Market incentives encourage the development of new drugs and high-tech treatments.

Group health insurance purchased by employers emerged during World War II, when wage freezes caused employers to offer benefits as a way to compete for workers. Nearly every reform since the early ’70s has sought to expand this concept. There are now more than 1200 private insurance companies in the nation.

For some of the uninsured, the government pays for health care through Medicare, Medicaid, the military, Native Americans, the Veterans Administration, and other programs. This leads to great complexity, since all of these plans follow different eligibility, underwriting, benefit, and reimbursement policies. 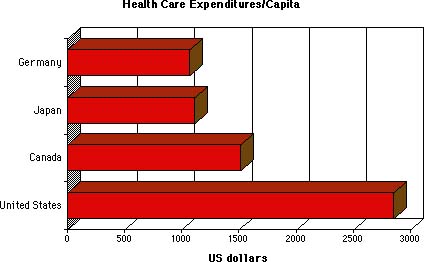 The Canadian health care system expresses the fundamental equality of Canadian citizens. The plan’s coverage is comprehensive, universal, and accessible. Known as a "single payer" system, funding for medically necessary care is provided by the provincial governments through taxes (with guidance and some funds from the federal government). Patients are free to choose among providers, and physicians serve primarily in private practice on a fee-for-service basis. Hospitals are independent, nonprofit institutions overseen by boards of trustees.

Canada’s health care system began as a grass roots action in Saskatchewan in the late ’50s; by 1966 all provinces offered such plans.

JAPAN: HEALTH CARE IS A RIGHT

Japan’s health care system is designed to make medical services available to all citizens via employer-purchased insurance and to control health care expenditures. This has resulted in one of the healthiest nations in the world at one of the lowest costs.

Various insurance plans are involved, financed by compulsory payroll deductions, taxes, and patient co-payments. Patients freely choose their providers, and providers are paid by a nationally uniform method and rate, negotiated by a council made up of insurers, providers, and citizens. Price increases are limited by a ceiling set by the government. A uniform fee schedule has helped to control costs and to ensure equitable access.

Japan’s system came into being for manual workers in 1922 as part of management’s belief that maintaining a healthy, productive work force contributes to the nation’s wealth. Later, coverage was extended to workers’ dependents and white-collar workers. Following World War II, Japan’s new constitution made health care a right for all citizens. By 1961, Japan had achieved universal health coverage, the first non-Western nation to do so. 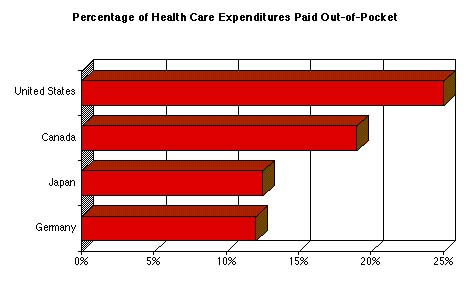 In 1883 trade guilds created the first health care plan in Germany. The government was so impressed that it used this as the model for the nation’s "sickness funds," which finance, deliver, and pay for care. The system combines decentralized power and decision-making with an effective negotiating system that takes place at federal, state, and local levels. There is a sense of solidarity among Germans that everyone should have access to medical services, regardless of employment, income, or ability to pay.

The plan began in 1974 with passage of the Prepaid Health Care Act, which required employers to provide health insurance to employees. Legislation in 1989 added those not covered by Medicare, Medicaid, or private insurance and emphasized comprehensive, preventive care. In 1994, health care programs for Medicaid and other low-income groups were converted into managed care plans.

The first managed care plans were started in the 1940s, with the development of several Health Maintenance Organizations (HMOs), such as Group Health Cooperative of Puget Sound. Their purpose was to provide comprehensive health care for a set monthly fee, rather than fee-for-service. Considered radical at the time, HMOs and other managed care products are now mainstream. Many have demonstrated cost savings and quality outcomes by emphasizing preventive care and conservative use of treatments.

Today, several health reform proposals, including President Clinton’s, have hopped on the "managed care" bandwagon, promising cost containment based on the notion that insurance companies can best control the health care purse strings. This appears questionable, however. The financial incentives in some managed care plans favor the payer’s interests over the patient’s. Moreover, managed care is likely to increase the already bloated administrative costs now associated with insurance bureaucracies.

"Managed care" and "managed competition" now encompass such a wide variety of organizations and plans, each with its own strengths and weaknesses, that predicting the impact of this financing mechanism is not yet possible.

William Glaser, a noted health expert, calls managed care a "mirage," a uniquely American solution that will ultimately fail. Health systems in all other developed countries, he says, allow patients a free choice among licensed providers (at least for primary care) and enhance competition by permitting any provider to participate.

Hsiao, William C., "Comparing Health Care Systems: What Nations Can Learn from One Another," Journal of Health Politics, Policy and Law, Winter 1992, pp 613-636.

Organization for Economic Co-operation and Development, Health Policy Studies, No. 1., US Health Care at the Cross-Roads (Paris, France: OECD, 1992) pp 9-69.

Sign up for CI News to get updates and inside stories. It's the best way to stay connected.