Table of Contents for IC#30 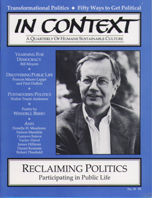 About This Issue
by Alan AtKisson

Reclaiming Politics by Robert Gilman
As the times change, we also need to change our approach to politics

Yearning for Democracy by Bill Moyers
One of America’s most beloved journalists speaks out on how to revitalize democracy by inviting Americans back into the conversation. Plus Citizens and Politics: The Kettering Report by Alan AtKisson.

New Ideas, Old Ideals
A selection of readings on politics and culture, featuring:

Daniel Kemmis on Sovereignty and Community
Jack Weatherford on America’s First Democrats
James Hillman on Men, Politics, and Psychotherapy
Suzanne Tedesko on Women, Politics, and the Environment
Nelson Mandela on Green Rights
David C. Korten on The Tyranny of the Global Economy
Margo Adair & Sharon Howell on The Power Taboo
Starhawk on Politics as Magic
Vaclav Havel on The Big Question
A Political Fable

Portrait of a Political Instigator an interview with Robert Theobald, by Alan AtKisson
A forty-year veteran in the field of innovative cultural and political change believes the time has come to move “beyond democracy.” Plus Prayer for the Unemployed by Irving F. Franke

Postmodern Politics an interview with Walter Truett Anderson, by Alan AtKisson
The author of Reality Isn’t What It Used To Be explains how to set your political rudder in a world where “radical pluralism” reigns. Plus Postmodern Thought: A Brief Orientation by Chris Davis and The Limits of Our Stories by JoAnn McAllister

Tepito: No Thanks, First World by Gustavo Esteva
This barrio in Mexico City prefers to manage its own affairs without interference from mayors, lawyers, and the forces of “development.” Plus Tepitan Tactics by Gustavo Esteva

Discovering Public Life an interview with Frances Moore Lappé and Paul DuBois, by Lila Forest
Democracy isn’t something we have, it’s something we do, say the co-founders of the new Institute for the Arts of Democracy – and people are doing it in communities all over the United States. Plus Doing Democracy: Examples From All Over by Frances Moore Lappé and Paul Dubois and A Direct Democracy Index by David Morris

The Question of Leadership by Donella H. Meadows
What makes a good leader? What can a leader really do? A system scientist’s analysis of the kind of leadership we need, and now

The Good Campaign by Chris Davis
Is it possible to campaign for office ethically? The story of four maverick candidates who ran clean, cheap – and successfully

Transformational Politics by Tom Atlee
In times ahead we will still have to play the old political games, but we can begin to play by new rules. Plus Political Dreams and Fantasies by Alan AtKisson

Fifty Ways to Get Political by the Editors of IN CONTEXT
A shopping list of suggestions – some obvious, some surprising – for getting more engaged in public life. Plus Letters To The Editor by Carla Cole