Table of Contents for IC#28

Effective strategies for changing the world 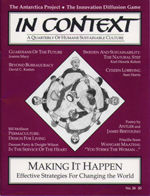 About This Issue
by Alan AtKisson

Educating a Nation: The Natural Step by Karl-Henrik Robèrt
How a doctor forged consensus on Sweden’s environmental problems, and put the entire nation in motion to solve them. Also: “That Was When I Became A Slave” (excerpts from an interview with Karl-Henrik Robèrt, by Robert Gilman)

“We’re The Solution”
Thoughts and stories from people who are making things happen.

A round-the-world motorcycle trip by Monika Vega
A high-school activist organizes a school-wide forum on the future by Tom Kertes
Taking solar box cookers to Pakistan by Mary Lou Krause
Who starts it? by Tom Sponheim
Big changes for the Exxon Valdez’s former third mate by Bill Masciarelli
Working to protect the badly polluted Tennessee River by Leaf Myczack

Guardians of the Future an interview with Joanna Macy, by Alan AtKisson
How can we care for our nuclear wastes? A remarkable grassroots program addresses the reality of our quarter-million-year obligation – and deepens our relationship to time. Also: The Standard Remembering, a passage often presented at Joanna Macy’s workshops

Beyond Bureaucracy: The Development Agenda an interview with David C. Korten, by Alan AtKisson
The failure of governments, the transformation of bureaucracies, and why voluntary action is our best hope for a better world – an in-depth interview with the author of Getting to the 21st Century

The Antarctica Project an interview with James N. Barnes, by Alan AtKisson
Passion, persistence, and savvy political and media work have paid off in this 10-year effort to protect the Earth’s last unspoiled continent

Citizen Lobbying: The State of the Art an interview with Sam Harris, by Carla Cole
The hunger lobbying group RESULTS lives up to its name by using innovative strategies, empowering its members to get involved – and healing the rift between people and politics. Also: a sidebar by Sam Harris describing organizational tools for grassroots lobbying

In the Service of the Heart an interview with Danaan Parry and Dwight Wilson, by Alan AtKisson
How the Earthstewards Network became a “precedent-setter” in international conflict resolution and ecological restoration, and their bold new projects in Central America and the Middle East. Also: a sidebar by artist Peter Cohen reflecting on his belief that “we are the living future”

Permaculture: Design for Livingan interview with Bill Mollison, by Alan AtKisson
The creator of permaculture doesn’t claim to understand it – but it’s the only system of design that makes sense in a world he calls “eerie.” Also: a sidebar by Marilyn Mehlmann reporting on the work of the Swedish Institute for Social Inventions

Wangari Maathai: “You Strike the Woman …” by Priscilla Sears
Despite the odds and occasional threats, the founder of Kenya’s Green Belt Movement raises her voice, and helps Kenya’s women raise theirs. Also: a message from Wangari Maathai reporting on her return to Kenya