Table of Contents for IC#22 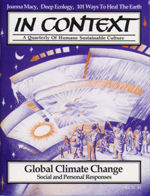 What’s Wrong With The Climate?by Robert Gilman
Examining the evidence for global warming reveals a lot of uncertainty – but a compelling case for urgent action. Plus What About the Ice Age Theory? by Robert Gilman

Who Needs Florida, Anyway? by Donella Meadows
Scientists must help us prevent climate change, not adapt to it. Plus An Appeal to Scientists by Ambassador Stephen Lewis

Breaking The Spell an interview with Joanna Macy, by W. R. Prescott
Denial of our environmental problems is the greatest danger but facing them is a step toward high adventure. Plus An Earth-Centered Curriculum by Richard Golden

Introduction To Deep Ecology an interview with Michael E. Zimmerman, by Alan AtKisson
Deep ecology is rethinking our relationship to the Earth

The Rights Of Earth an interview with with Dr. Noel J. Brown, by W. R. Prescott
An “Environmental Security Council” could soon become reality, says the Director of the UN Environment Programrne. Plus The Greenhouse Opportunity by Joel Swisher

Strategy For A Green Century an interview with Huey D. Johnson, by W. R. Prescott
Savvy politics, broad coalition building, and massive programs are trademarks of this veteran environmentalist

Governance and Global Warming a conversation with Walter Truett Anderson and Donald N. Michael, by W.R. Prescott
The greenhouse “rumor” could easily be misused or distorted by those trying to sell their favorite political or social agenda

Global Warming Is A Communist Plot satire by John Byrne Barry
The Cold War may be over, but the Hot War is just heating up

101 Ways To Heal The Earth An IN CONTEXT Guide to Personal Action
From recycling to bicycling to political organizing, this list will get you started on work to protect the global climate

Living Restoration an interview with Savitra, by Alan AtKisson
Auroville in southern India is a model of environmental restoration, and site of an Earthstewards’ PeaceTrees project

Lizards On Holiday by W. R. Prescott
Our “reptile brain” may sometimes get in the way of real progress – but we’re at our best when things are at their worst. Plus The Bear at the Door by Alan AtKisson

Resources To get involved or get more information

Planetary Pulse*Social Change While-U-Wait *Governments Wise Up * How Green Are You? *Grassroots Recyclers * A Printer’s Story * Voting Out Nukes