Home / The Foundation Stones Project / What Time Is It?

The Core Challenge Of Our Times

This article provides a starting point for understanding the issues addressed on this website. If you are new to sustainability concerns, it will give you a big-picture overview about what these concerns are. If you have been around sustainability issues for a while, it will orient you to the approach we at Context Institute take. (The classic yet still relevant 1990 article, Sustainability: The State Of The Movement, provides a complementary starting point and is recommended for those who are new to the movement, new to Context Institute or would just like a big-picture reminder.)

All of these are connected to the idea of sustainability and play important roles, but none of them are fundamental. With each of these we need to ask: Why is this important? What is the underlying problem it addresses? Is it more important now than in the past? If it is important now, are we, as a society, doing as much of it as we need to?

Diving into these questions asks us to look at the big picture of what is actually happening in our world today and to see today in the larger frame of history. When we do this, we find:

In other words, our cultures (around the world) are increasingly out of sync with the on-the-ground reality created by the driving forces of population, technology and the economy, and their impact on the environment. A major consequence and indicator of being out of sync is that we are failing to adequately address the dangers or seize the opportunities, and so we drift toward disaster.

The core challenge of our times is thus to bring our cultures, including our institutions (like government, the economy, etc.), into sync with the on-the-ground reality of today and tomorrow.

This is a very human challenge, and as we delve into it, we will find that it require us to change our relationship with nature, with each other and with our inner life.

It is this challenge that motivates the Foundation Stones project and that motivated In Context. It is why Context Institute has always focused on sustainable culture and why I like to say:

The rest of this article provides more depth about this challenge.

To begin to get a better perspective on “our times,” on where we are in the flow of history, I’d like to start with the following graph, which is based on scholarly estimates gathered by the US Census. (The graph is zoomable. Click and drag to zoom in, double-click to zoom out. If you don’t see the graph, try reloading the page.)

While there are some interesting wiggles along the way, the big story here is the huge population growth in the last few hundred years. This growth has a number of important characteristics:

The number of us on the planet is only one 0f many areas that have seen dramatic change in the past hundred years or so. For example, as a species:

Please note that this is per person! Again, we see the same kind of unprecedented rapid rise in the past few hundred years as we did with population, but now it is a multiplier on top of that population growth. It is a remarkable achievement that represents substantial improvement in the material well-being of billions of people (even though, as an average rather than a median, it gives disproportionate weight to the wealthiest parts of the world and of society). Yet we have done so by going beyond the long-term capacity of the Earth to sustain us.

All of these changes add up to a world that is profoundly different from the world of even 50 years ago, much less a few hundred years. It is a world with many more people, much more impact on the environment and all of the “small-world” effects that come from instant electronic communications. These changes, and others like them, present us with both unprecedented dangers and unprecedented opportunities.

As an example of the dangers, let’s look more closely at what is behind the “Ecological Footprint = 1 Earth” line on the graph above. The ecological footprint “measures how much land and water area a human population requires to produce the resource it consumes and to absorb its carbon dioxide emissions, using prevailing technology.” It is one of the best tools developed so far for assessing the overall human impact on the natural world.

Humanity’s worldwide ecological footprint over the last few decades looks like this: 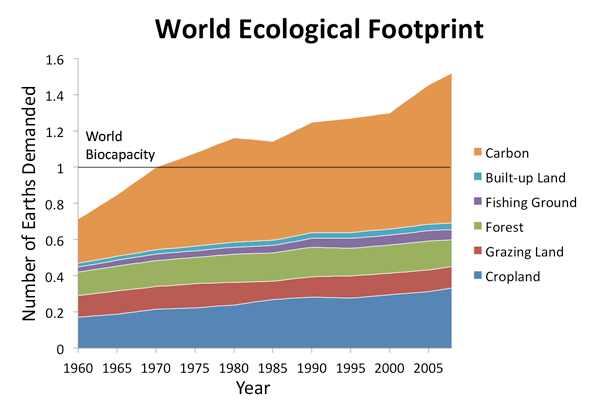 (The data for this chart goes up to 2008 and is from the Global Footprint Network’s 2011 Data Tables. The chart is divided into the six components that make up the total footprint.)

This chart and the analysis behind it have a lot to tell us:

There are many other indications, from the shrinking of the arctic ice cap to the accelerated extinction of species, that agree with the basic result from the global footprint analysis, namely that sometime in the past few decades, humanity overshot the Earth’s long-term capacity to sustain us.

Living beyond the Earth’s capacity (i.e., overshoot) is like living beyond your economic means. You can do it for a while but it often doesn’t end well. We have lots of evidence from other species, from earlier civilizations and from computer modeling of current global society that overshooting your carrying capacity can easily lead to a population collapse well below the initial carrying capacity — if any survive at all.

It is all too easy to construct realistic scenarios in which our current overshoot leads to a collapse in the human population somewhere in this century that is catastrophic for natural systems, for society and for billions of people — including whatever children and/or grandchildren you may have.

Yet our current overshoot doesn’t have to have this outcome. The global problems that have brought us into overshoot all have technically feasible solutions. For example, Lester Brown, the founder of Worldwatch Institute and Earth Policy Institute, has been evolving his global plan for sustainability for decades (see Plan B 4.0 and World on the Edge) and finds that a meaningful plan to move the world toward a sustainable future could be funded with an annual budget equal to only 12% of the world’s current annual military budget.

A major example of the opportunities of our times is that we may well be within a generation or two of ending warfare as an institution.

Our increased international connectedness through communications and commerce and the long-term damage that modern weapons can create are making more and more of the world off-limits to warfare and reducing its scale even where it does occur — all at the same time that instant communications magnifies its presence in our consciousness. These trends led us to focus the Winter 1989 issue of In Context on the question “Is militarism fading?” and they have fortunately continued.

A generation or two may seem like a long time, but when I think of all of the hundreds of millions of people over thousands of years who have longed for a world at peace, it seems close and well worth the effort to get there.

What stands in the way?

As I have pondered this over the years, I’ve come to a multi-layered answer — a bit like peeling an onion.

Before getting into that onion, however, I’d like to acknowledge that millions of people have been doing something about these issues, much more so than is apparent in the major media. Nevertheless, the leadership provided by our major institutions on these issues has been disappointing at best, despite the fact that there has been mainstream acknowledgement of the need for some form of sustainable development at least since the US Global 2000 Report to the President in 1980 and the UN Brundtland Commission Report in 1987. It often seems like we are on a bus headed toward a cliff while the bus driver is more interested in calming the passengers, or simply getting them to shut up, than in finding a meaningful new direction.

So what’s the reason for this failure? Here’s my onion of response:

The first layer says: the reason is that powerful special interests are successfully opposing the necessary changes. For example, the fossil fuel industry doesn’t want any constraints or competition that would diminish its ability to get maximum value out of its assets. But this begs the question “Why are these special interests able to be so successful in their opposition?”

The second layer says: the reason is that particular institutions (e.g., governments and corporations) are structured in such a way that they allow, indeed often encourage, special interest short-sightedness to dominate over the long-term common good. But why does the public allow this to happen?

The third layer says: the reason is that a majority of the public give priority to their own immediate personal benefit over the long-term common good, so they create and support institutions that are aligned with these values.

At this point it is tempting to say that this behavior is just human nature, the way it has always been and so, end of story. However, that’s not how it has always been. Most hunting and gathering cultures did take the long-term view, like the Iroquois, who required that each decision be evaluated by asking “What impact will this have on the seventh generation from today?” One of the great gifts of anthropology has been to show how diverse human societies can be.

So my fourth layer says: the reasons our society deals so poorly with the issues we are facing today are a matter of changeable culture more than fixed human nature. The key to understanding the core challenge of our times is to realize that we have inherited most of our institutions, values and concepts from a very different time in history. However well they worked when they were created, they no longer fit the population/technology/economic/environmental context of today. They aren’t working to solve today’s problems because they weren’t developed in or for today’s context.

We are in a new world

The core challenge of our times grows out of this fact: In the last few decades, we crossed a profound boundary and we are now in a new world, a new context, in which the strategies for how to succeed in life are very different, often diametrically opposed, to the strategies whose very success has brought us to this place. It is no wonder that many people feel confused and upset.

Nevertheless, if we are to at least avoid catastrophe and at best learn to truly thrive, we need to deal with the reality of our world as it is today and as it is becoming, not as it has been. That begins by acknowledging that we are indeed in a new territory and then transforming our cultures, in ways that are appropriate to each place and society, to fit this new territory.

Transforming our cultures to fit our new reality is the core challenge of our times.

I see no technical obstacles to creating thriving sustainable planetary cultures in the coming decades, with a broadly-shared quality of life that will make today’s times seem like a dark age. The momentum of history is pointing in that direction, but whether we will get there, how long it will take and how graceful the transition will be is up to all of us.

(The next piece in the FS Main Thread is The Foundation Stones Project.)