Home / The Foundation Stones Project / Tools For The Journey

The Dynamic Life of Long-Term Memory

This is the second in a series of articles about how our minds work, aimed at better understanding how to facilitate faster and more graceful cultural change. Please see Taking Einstein Seriously for an overall introduction.

Long-term memory is what we often think of simply as “memory” and it is the repository of everything we can recall, from a minute ago to many years ago. It is about as central to our existence as conscious beings as anything could be. It includes both what is called procedural memory (knowing how to do things, like ride a bike) and declarative memory (knowing that …), which can be about events (episodic) or about general knowledge (semantic).

Note that this includes everything we know and every mode of knowing — kinesthetically, visually and somatically as well as verbally. It is the totality of our knowing.

There is a great deal of mystery about just what memory is and how it functions, but one thing that is clear is that memory is built through associations. The most easily remembered ideas, skills and events are those that involve multiple senses, that have lots of personally meaningful associations and that have emotional significance. Each facet of a memory and each association provides a pathway through which it can be recalled. Indeed, each memory is inseparable from the network of associations that connect it to the rest of our knowing. 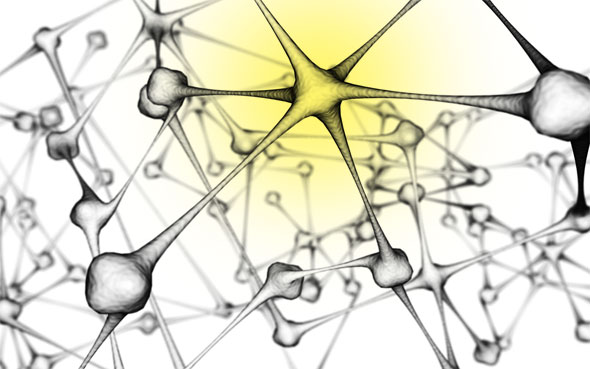 (Hat tip to zastavki.com for the underlying image.)

When we learn something, we are adding a new node to the existing vast network of our long-term memory. This means that “a memory” is not a separate “thing” but an inseparable facet of a much larger structure. When we bring a memory to consciousness (i.e., focus attention on that facet of our total memory structure), we also activate the associations connected to that memory, so that they also become easier to recall.

This makes each new memory personal since it depends on the personal network of associations in which it is embedded. Metaphorically, a memory is much more like an interpretative painting than it is like a photograph. We don’t passively “record” an event or an idea when we memorize it. We actively combine whatever the incoming new information is with our existing knowledge and experience in our own uniquely personal way. Much of this filtering and interpreting happens subconsciously, but that doesn’t make it any less personal or real.

In addition to being personal (and selective) interpretations of what we experience, memories are also part of a constantly changing structure. Each time we learn something new, the network of associations that is our memory changes, and these changes ripple through to affect even those memories that weren’t directly involved in the learning. In this sense, even the image of an interpretative painting is too static. A more refined metaphor is that a memory is like a constantly morphing electronic image.

Recall is similarly dynamic. We often talk about recalling a memory as if the memory was something fixed and static, like a piece of paper pulled out of a file folder, but in fact recall is a creative act influenced by the time and circumstances of the recall as well as all of the changes in our total memory since that memory was first stored. When we recall something, we put the pieces of association that make up the memory together in the context of the moment, that is, we “re-member” when we remember.

In all these ways, the human memory system is different from paper files and computer memory. In computers, information is stored (in the RAM or on a drive) in a static state with a single address used to recall it. As long as the computer memory is working properly, there is no change in the stored data. It can only be changed by recalling it into the central processing unit (CPU) for modification. There is also no particular relationship between various chunks of data that may be physically near each other on the storage device — this is why RAM is called random access memory. Information stored on paper is also static and there is nothing inherent in the information-on-paper system that actively associates one paper file with other paper files. Indeed the static, passive, self-contained quality of computer files and paper files serves as a helpful stabilizing complement to the fluidness of human memory. This is why we create written legal documents, shopping lists, and all kinds of other written memory aids.

There are two major consequences for the process of cultural change that flow from the way we create and recreate memories:

1) The fact that memories are created through personal interpretation combined with our human tendency to avoid cognitive dissonance means that we usually interpret new information so that it is consistent with our existing beliefs. Indeed it is very hard for us to even be aware of our blind spots and biases as we create new memories. This provides stability and can make it hard for change-supportive information to be taken in — most of the time.

Nevertheless, we do learn new things, sometimes even with enthusiasm. It is easiest for us to learn genuinely new things if the new material comes to us with some positive association to what we already know, in digestible steps and at a pace that matches our own rhythm. This is why diffusion-based voluntary change is often both faster and more enduring than top-down imposed change.

2) At the same time, the interconnectedness of our memories makes it possible to have new experiences or insights that change large areas of our understanding. It is not uncommon to hear someone say “After I found out about X, I could never look at Y the same way again.” Life-changing insights don’t happen every day for most people, but many people have had them at one or more points in their lives. The Foundation Stones project is intended to support just such insights and reframes.

Finally, recognizing the fluidity and self-reinforcing selectiveness of our long-term memory system should encourage us to avoid over-confidence in our own knowledge and help us stay open to genuinely new, even dissonant, information.