Home / The Foundation Stones Project / Tools For The Journey

(This article follows Culture As Interface in the FS Main Thread.)

If we are going to use the culture-as-interface framework, …

… we will need an operational sense of what we mean by “innate human nature.”

Trying to understand “innate human nature” in relation to culture has been challenging in the past, but I’m hopeful that our prospects are better now. They are better in part because of recent advances in neurobiology and related areas of psychology. Yet as wonderful as these are, by themselves I don’t find them to be enough. We also need a fresh approach, a fresh way to think about “innate human nature.” I’d like to suggest such a fresh approach through analogy with an iconic 21st century technology: cellphones.

The characteristics and evolution of cellphones have interesting lessons that can help us better understand “innate human nature.” The first cellphones were, understandably enough, focused on one function: talking. Over time, however, other functions (e.g. calendar, address book) were added. These additional functions were provided by software programs (“apps”) built into the phone. These built-in apps allowed customization by the user (e.g. you could enter your own info in the calendar) but the user couldn’t add any additional apps. Phones like this are still sold and known as “feature phones.”

The next step in the evolution of cellphones started about a decade ago, with “smart phones” that allowed new apps from independent developers to be added by the user. This may not seem like a big change, but in fact it allows smart phones to be much more customizable and adaptable and to serve many more functions than feature phones. They became handheld computers that could, almost as a footnote, also make phone calls.

Let’s look at the character of feature phones and smart phones with the help of the following diagrams:

Here’s the explanation: Like much of today’s electronic technology, a cellphone is a combination of hardware and software. The software is usually thought of as divided into two levels, operating system and apps. The “lower” level operating system interacts directly with the hardware and provides a general toolbox of functions available for use by the apps. That is, it serves as an interface between the hardware and the apps. The apps provide specific features of interest to users through a user-accessible interface.

In a feature phone, the two software levels are distinct from the programmers’ point of view, but the user only sees the built-in apps so that’s all the feature-phone user cares about. In a feature-phone, the operating-system level is hidden.

In a smart phone, the cellphone company makes the operating system level visible to independent programmers and users. Google’s Android, Apple’s iOS and Microsoft’s Windows Phone are all examples of smart-phone operating systems. There are still two software levels, but the apps level is now divided into built-in and user-added apps.

(Personal computers also have this distinction between operating-system software and application software — and had it before cellphones. However, I’m using cellphones as the model for this analogy because there is nothing quite like the feature phone in the world of personal computers, and the contrast between feature phones and smart phones is central to the analogy.)

To give you a better idea about how these pieces work together, let me dive into an example. Smart-phone hardware generally contains a number of different sensors, one of which is an accelerometer (which can detect changes in motion). The operating system provides a software command that allows an app to “read” the signal coming from the accelerometer but how this signal is used is up to the programmer of the app. It could be used in a pedometer app to detect the up and down motion of walking. Alternatively, it could be used in a camera app to detect when the phone (and its camera) have the least motion so as to minimize camera-motion blur. Or the signal could be used in hundreds of other ways limited only by the imagination and skill of programmers.

The apps will only work if they make use of the functions and commands provided by the operating system, but within those constraints there is enormous room for creativity and variety. The iPhone 5 comes with 26 built-in apps. At the same time, there are over 700,000 user-installable apps currently available from the iOS App Store — all made possible by having an operating system level on which user-installable apps can be built.

If we apply a similar model to the animal kingdom (including humans), we get the following diagrams:

In these diagrams, I’m acknowledging and/or asserting that:

This diagram now gives us a way of defining just what we mean by “innate human nature”: 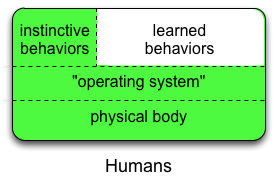 That is, in total, our innate human nature includes our physical body, our human “operating system” and our instinctive behaviors. However, from a cultural-change perspective, the most interesting part of this is our human operating system — our hOS — because that is what our learned behaviors interact with most directly.

As best as I can tell, past attempts to understand “innate human nature” in relation to culture have looked at “innate” by analogy with other animals and have focused on innate behaviors (the “app” level), either in terms of human instinctive behaviors or in terms of culturally universal behaviors. While both of these are part of the total picture of human nature, they are of secondary interest compared to the innate capabilities at the deeper operating-system level.

Creating effective cultural change is analogous to creating a new app: The change needs to mesh with the capabilities provided by the operating system, but as long as it does there is enormous room for creativity and variety.

In future articles, I’ll get into the details of the capabilities that make up our hOS and how we can build on these to transform our cultures — how we can create those new cultural “apps.”

From this article, the key points that I hope you will take away are:

(The next piece in the FS Main Thread is The Burden And The Gift Of Culture.)