In June of 2014, I posted a video describing Context Institute’s long-term strategy based on three program areas.

In April 2015, I posted a first Progress Report. This is now the second.

Reach: The six videos from the February 2014 presentation have since been played an average of about 1000 times each.

Translations: Thanks to the generous efforts of translators around the world, these six videos have been dubbed into Spanish and Chinese and have subtitles in Spanish, Chinese and Russian as well as English.

Tools For The Journey (Stone 2)

The videos from the two Tools For The Journey presentations in January 2015 are now available:

I invite you to take a look!

After completing the Human Operating-System Literacy and the Systems Literacy presentations, it became clear to me that the time was right to start developing an experiential learning program to complement and put into practice the conceptual material in the presentations.

We’re calling this new program Bright Future Now since it’s intended to help participants move from an Empire Era mindset (which almost everyone has) into a Planetary Era mindset. It will do this by enabling participants to gain Planetary Era skills, behaviors and understandings – to become enculturated into the bright future of the Planetary Era now. The experience is like lifting away grey clouds that have been around so long you didn’t even realize there might be anything better. The graduates from this program will go on to make up the Bright Future Network, an incubator for the next stages of Planetary Era culture.

Bright Future Now has been gathering momentum throughout 2015. Among other things, we created a 12-person advisory ground and received a seed-funding grant from the Kalliopeia Foundation. We still have more to do before we can offer it as a public program but, now in 2016, I want to start sharing the development process through this website and through CI News. You can find out more at Bright Future Now Initial Vision and its companion, Bright Future Network Initial Vision. Expect these new programs to be a major theme for the coming months.

The Global Ecovillage Network (GEN), which I helped start, had its 20th anniversary gathering in July 2015 with over 330 participants from 65 countries coming together at the Findhorn Community in Scotland. GEN has grown into quite a success. It’s especially strong in Europe and Latin America but also has a growing presence in Africa, Asia, North America and the Middle East. It works closely with the UN, national governments and other NGOs as well as with both traditional and intentional communities. 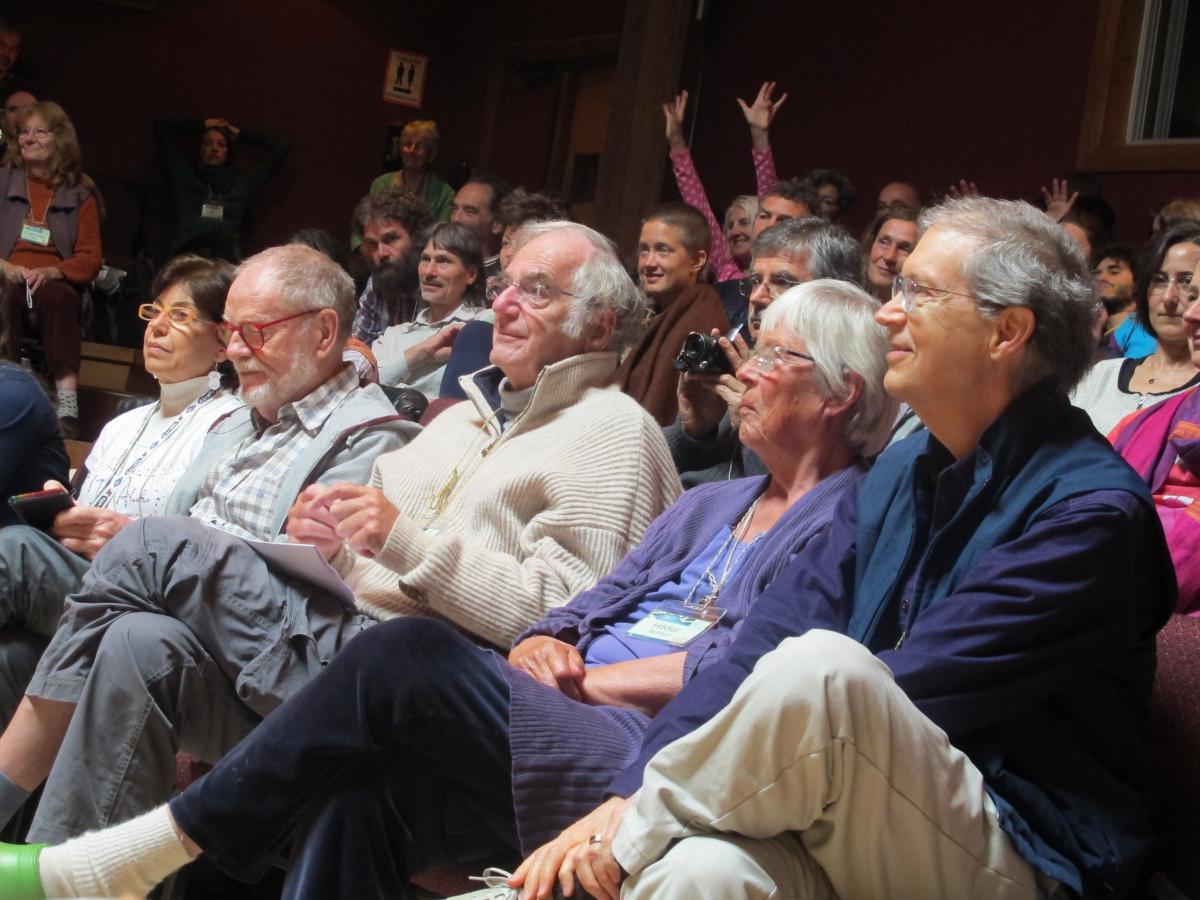 GEN was seeded 25 years ago when Ross and Hildur Jackson of Gaia Trust asked CI to research ecologically-oriented communities and develop a strategy for encouraging their development and spread. That study (much of which went into In Context #29) led to an informal network from 1991 to 1995 and then the first big conference in 1995, organized by Diane Gilman and John Talbott, at which GEN was officially created. The first decade was challenging for the network, but gradually the momentum built to the place we are today.

I find the story of GEN especially encouraging as we launch Bright Future Now and the Bright Future Network – new small seeds that could also grow into a worldwide presence.

In June 2015 we brought this group of a dozen Planetary Era explorers to a celebratory close so that I could focus my energy more fully on developing Bright Future Now.

We had 368,664 visitors to the website in 2015 – just over 1000 visitors a day. A little over half came from the US with the rest well distributed around the world from a total of 216 different countries and territories.

More and more people are connecting with Context Institute. We’re currently up to 2510 subscribers to CI News, 1488 likes on Facebook and 209 followers on Twitter.

In this context, I’m working with the Findhorn ecovillage community in northern Scotland (about 400 people) as they evolve their internal governance. My work with them began in 1999 when I helped them write a community constitution and establish the New Findhorn Association. This work picked up again in 2013 and since then we’ve been exploring how to have a practical Planetary-Era system for this diverse “village” that includes over 40 different independent organization.

In July of 2015 a special Community Change Working Group was charged with the task of proposing new ways and organisational structures for collaboration, collective decision-making and information sharing in the community. I’m helping by serving as their prime consultant and mentor.

Starting in November of 2014, John Buck (Sociocracy author and trainer), Ian Gilman (software developer) and I started on a quest for good integrated software that supports self-management in organizations with distributed decision-making (like Sociocracy and the Findhorn community). We searched for existing software and looked for existing components that might be patched together, but no luck, so we started to build software, now called Weaver, that could serve this need.

Weaver software being used in its own development

We got a big boost in April 2015 when Keith Swenson joined the team and brought his existing group-management platform called Cognoscenti. We’ve all been working since to adapt and extend Cognoscenti to the needs of sociocratic and similar groups.

We’ve made considerable progress, enough so that we could really use some additional programming help. If you, or someone you know, would like to work on this under Keith’s leadership, using modern technologies like AngularJS and Bootstrap – please let me know.

In my role as a member of the Advisory Board, I got a deeper sense of the SelfDesign Graduate Institute by meeting with faculty and students over 2 days at their August onsite gathering. SDGI makes a lot of use of video conferencing throughout the year for its small classes and I’m learning from them as we design Bright Future Now. I was glad to hear how personable, even intimate, the students felt their online seminars were.

A system map of this report is available. Just click on the image below. 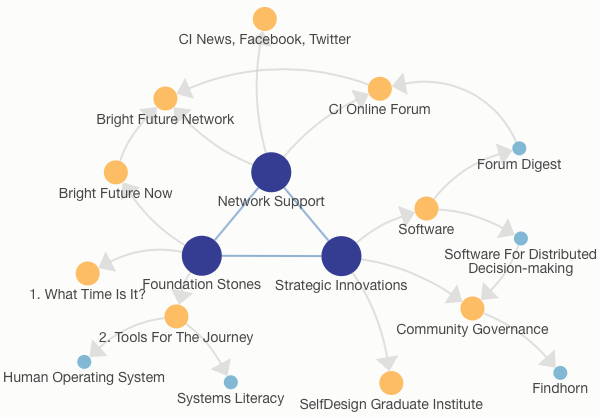