Here’s the progress we’ve made in the past 10 months towards actualizing that strategy:

Reach: The six videos from the February 2014 presentation have since been played an average of over 780 times each.

Translations: Thanks to the generous efforts of translators around the world, these six videos have been dubbed into Spanish and Chinese and have subtitles in Spanish, Chinese and Russian as well as English.

Tools For The Journey (Stone 2)

The two presentations for this Stone – Human Operating-System Literacy and Systems-Literacy – were successfully recorded in late January 2015. The first video from the first presentation is available and the rest are being edited.

More and more people are connecting with Context Institute. We’re currently up to 2000 subscribers to CI News, 1300 likes on Facebook and 197 followers on Twitter.

Since May 2014 about a dozen of us have been meeting monthly in Seattle to support each other as we explore being Planetary Era catalysts. It’s been a fun discovery process, developing a culture that welcomes each of us in the wholeness of our being. I see this group as the prototype for face-to-face “home groups” that will eventually be all over the world. We’re not ready for a broader roll-out yet, but hopefully in 2016.

In support of the Seattle Group and of volunteer teams like the translators, and in preparation for a wider network, we have created a private online discussion forum based on XenForo.

One of the key characteristics of the Planetary Era is consensual collaboration. As a society, we have many ways we do this in private life but we still have a long way to go to bring governance into the Planetary Era.

In this context, I’m working with the Findhorn ecovillage community in northern Scotland (about 400 people) as they evolve their internal governance. My work with them began in 1999 when I helped them write a community constitution and establish the New Findhorn Association. This work picked up again in 2013 and since then we’ve been exploring how to have a practical Planetary-Era system for this diverse “village” that includes over 40 different independent organization. We are making progress in blending the community’s own strong traditions with elements from Sociocracy.

Speaking of Sociocracy, for the past five months John Buck (Sociocracy author and trainer), Ian Gilman (software developer) and I have been working together on a challenge that John identified. In his experience, there is no good integrated software that supports organizations with distributed decision-making (like Sociocracy and the Findhorn community). We’ve searched for existing software and looked for existing components that might be patched together, but no luck, so we’ve started to build software that will really serve this need.

If you are interested in being involved with this project – as a beta tester, as a software developer or as a supporter – please let me know.

Speaking of software, Context Institute’s software team is well along in its first project. The big missing piece in our online forum has been a daily summary digest that gets emailed out to users – so we are creating one. (Kudos to Eldan Goldenberg for most of the work on this.) We expect to have it ready for open-source public release in the next few months.

I accepted an invitation to join the Advisory Board for the SelfDesign Graduate Institute, an outgrowth of the SelfDesign education movement. I feel their learner-directed approach is an important part of the necessary transformation of education.

A system map of this report is available. Just click on the image below. 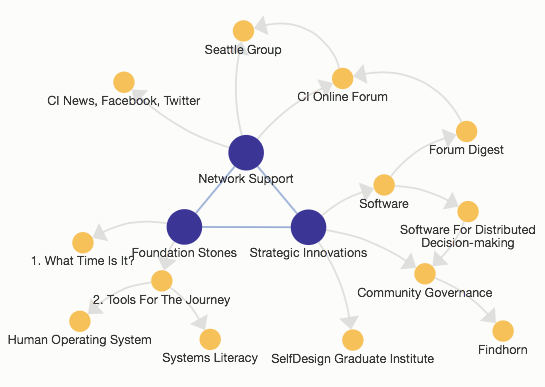