Layers of Chaos – real and apparent

What contributes to the sense that chaos is rising in the world? In this newsletter I’d like to tease apart what I see as the many layers of this “chaos” to better understand it and how we can respond.

(This comes from one of our many conversations in the Bright Future Network. I share it both as a window into the network and in its own right.)

The Layers of Chaos

What do we mean by chaos?
At the dictionary level, chaos is “a state of disorder and confusion.” That makes it sound like something “out there” but it’s as much in our minds as in the world. It’s a human assessment we apply to situations we don’t understand. Two people can look at the same situation and only one may assess it as chaotic.

Actual and apparent
Nevertheless, it certainly feels like familiar social patterns are breaking down or at least being challenged/questioned at an increasing rate – whether it’s the norm-busting of Trump and his allies or the norm-busting of #MeToo. It does indeed feel like something objective – that seems chaotic – is rising. Yet there are also many forces and actors in society that are amplifying the impression of chaos – both intentionally and not. We need to tease these apart to find our right relationship with what’s actually going on.

Layers
I’m using the metaphor of layers because I feel what we experience as “chaos” is a blurred-together composite of many different influences. Here’s a stack of the ones I’ll call out in this post: 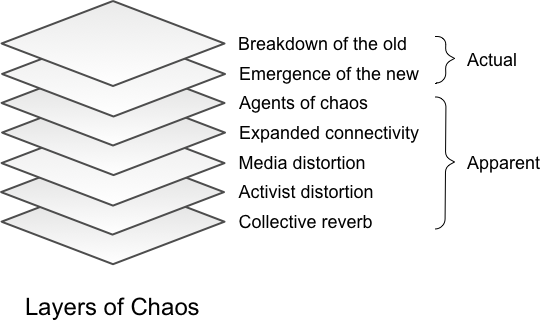 OK, on to the specifics:

These factors aren’t likely to subside any time soon. How can we respond? By getting really good at:

We can then turn the energy of these times into opportunities for meaningful change.

If you’d like to learn practical tools for helping to usher in the Planetary Era and collaborate with fellow change-makers from around the world, I invite you to join the upcoming 7-week online Bright Future Now course. Graduates say that by the end of the course they feel ready for anything – and more at ease within themselves in the midst of these tumultuous times.

The next course runs from Sep 29 to Nov 18. Early-Bird rgistration is $375 and closes this Saturday, August 18. Payment plans and financial aid are available.

In this time of transformation, may you find the support you need to be the change you want to see.
With appreciation,
Robert Gilman
August 15, 2018